Almost 900 group thread posts, and almost 180 projects made – What an amazing first quarter our Good Intentions Club has had. Very productive indeed!

For anyone not sure what the Good Intentions Club is, you can read this post but in a nutshell it is a club that we already have the yarn and pattern for, we just needed the boost to get on with them.

We’ve had everything from kits purchased at yarn shows, to that pattern that cried out so loudly to be knit in that special yarn, to some knitters making intentions good and just knitting from stash on designs they had in their queues. As always I am blown away by the sheer enthusiasm for group activities like this, in the KB community.

Here is your Quarter 2 klaxon! On 1st of January it is time to go back to those project bags you bundled up back in October and pick your next quarter club project. Will it be a surprise? Do you know which one you want to knit next? Will you flip a coin?

Let’s look at some of the Good Intentions made real in the first quarter!

Maylin, one of our muckers, and her Carpino sweater, pattern by Carol Feller

Bit wrinkled but my first Good Intentions project is off the needles. This is Carpino by Carol Feller, knit in Titus 4ply. I love the fit, especially around the shoulders. I did make the icord neck hole a little smaller and possibly may have to redo as it only just gets over my head. I have been wanting to knit this for a long time so very glad Louise and all the encouraging gang at the Knit British ravelry group have spurred me on. Excited to start my next Good Intentions project in January. #goodintentionsclub #knitbritish #carpino #carolfeller #baaramewetitus

Catherine’s Strokkur sweater, pattern by Ysolda, is stunning and it looks so warm. It is lovely to know that knitting this has been a bit of a journey of discovery.

I know I've already shared this finished project as part of Wovember but this was also my #goodintentionsclub project with #KnitBritish. Partly because I've had the pattern and yarn since earlier in the year but mostly because the intention of knitting myself a jumper has been a long while in the making. Overcoming my fears of wasting time, effort and money knitting something in a size that didn't "deserve" my efforts has taken a while, but I'm so pleased to have reached that place. I love the fit of my Strokkur jumper, I love its warmth, I love its colourful yoke- something I've always wanted to knit for myself- and I really love that it is sized for me and made by me. Here's to many more handmade jumpers in the future! Photo is pre-blocking as I was in such a hurry to wear it 😄

Front and back joined, second repeat started, progress being made 😊 #goodintentionsclub

I love Anthea’s Inglis Mitts, another by Ysolda – she used her Cornish Tin II from Blacker. Don’t they look cosy?

It wasn’t just sweaters, or clothing and accessories – there were cephalopod too! Check out Claude the Octopus, made by Kirst McCullough! He is ace! 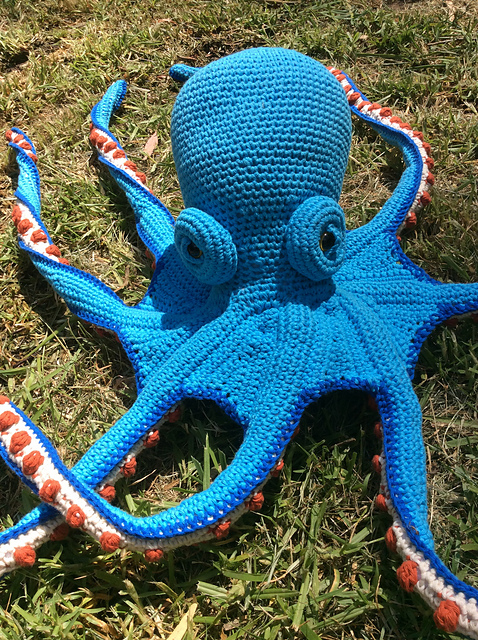 Slitknits chose a Mahy, by Karie Westermann. I love the colours and the texture of the yarn.

#mahy by @kariebookish off the needles. 🍃first task from #goodintentionsclub done.

You can get a little glimpse at all of the amazing work produced by looking here – Don’t you just feel angelic having made those? I know some of us struggled with the devil in some of these projects, but persevered on – for example Whitehorse gave our HeckyThump a bit of a time, but she managed to finish it AND three other sweaters…the force is strong with that one!

Others of us had Good Intentions planned out – ahem...like me and my Aiken – but then ended up sallying on with other intentions. I finished my Anora Cardi, pattern by Elizabeth Smith. I had bought the yarn from Uist Wool for this design and managed to finish it! Here’s a silly photo

silly-but-genuinely-happy-cos-i-love-my-new-FO face for day 17 – layer. This is my new layer! it’s #Anora by @thebrownstitch. i used two colours. Main yarn is #brisgean from @uistwool and the bands/hem is #rosedeanryelands. I really wanted an open cardi, and a looser fit (as most of mine are fitted) – i’m so pleased with the results. Better pic of knitwear soon! #wovemberinstachallenge #knitbritish #lovelocalwool #wovemberWAL #wovember

Thank you for making Quarter one such fun. Here is to Quarter two! The thread is open in the Ravelry group. I won’t close the Q1 thread as I am sure people will want to get chatting. Thanks also to Jane Burns who provided a wee prize in Quarter 1 to five lucky winners.

If you didn’t take part in Quarter 1, but want to take part in our next cast on, on 1st January – do it! We’ll love to see you!